A new site launched recently called Microstock Analytics. I signed up not long after it launched. I’ve not had comprehensive analytics for my ports since iSyndica closed, and I kind of missed seeing my sales stats from various microstock sites configured in one place. However, iSyndica’s primary function was for syndicating files and not its stats. Microstock Analytics is for those who want to know exactly how much they are earning and what kind of images, or shoots are working for them. I will show you a few examples of what it can do.

A few years ago I had a hold up with my work visa for Indonesia, I was supposed to pick up the visa in Singapore, but once I got there I was told that it wouldn’t be ready for at least week. I wasn’t going to hang around a big and expensive city for a week, so I got a flight to Phnom Penh in Cambodia and basically enjoyed an unexpected holiday in the country.

On Microstock Analytics I can find out the analytics for all the images I have or for groups of images, one method is to use keywords, so I typed in ‘Cambodia’ to see the results. Below are thumbnails of 23 outstanding images (I’m biased) from this keyword search, which made it on to the big four agencies (mostly in 2008 and 2009). Further below is a bar chart showing how much these images have earned per month, so far this year. There are various ways a user can order the images, for example by ‘revenue’, ‘Revue/Month’, ‘Return on Investment’ and Hourly Rate Estimate’. 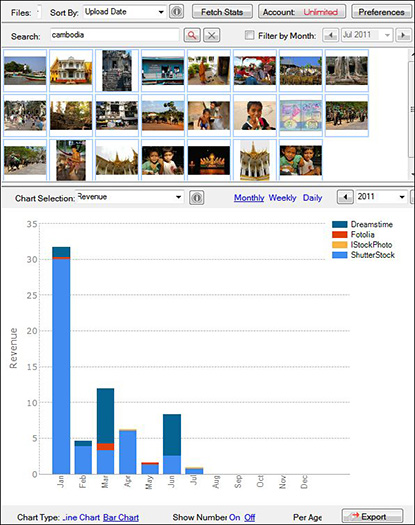 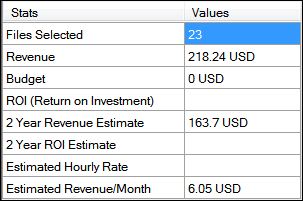 Budget, ROI (Return On Investment), 2 year ROI and Estimated Hourly Rates are blank as these are figures which will show up depending on what figures you put in (I didn’t enter any). If I were to create a ‘fileset’ for these images, I could enter the ‘Budget’, ie. how much I spent and I’d also have the option of entering the amount of hours spent. From these figures, my Return On Investment and Estimated Hourly Rate would be calculated and added to the figures above. The revenue for images from the 4 sites show up automatically, without having to input any data. As you can see, so far from these images I have made $218.24. I can’t remember what my return flight from Singapore cost, but it would have been no more than $200. Therefore, these 23 images have already covered the cost of my flights and after a couple of more years, they are likely to cover the cost of my accommodation (I wasn’t staying in the Ritz).

Now lets break down the earnings, below are two charts which show my earnings from each agency and the type of sales. 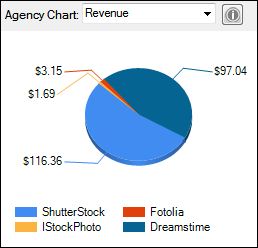 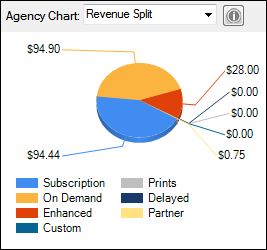 We can see that most of my earnings have come from Shutterstock, with Dreamstime coming in a close second, also from these images I have earned almost an equal amount from ‘on demand’ downloads (credits) and downloads via subscriptions. My portfolios on istock and fotolia are a fraction of the size of my two main earners, so I can’t expect too much from them. Now for ‘Revenue Per Download’ and ‘Sell Through Rate’ (the percentage of photos that have sold at least once).

Read Also  Things That Amuse Me When Buyers Download 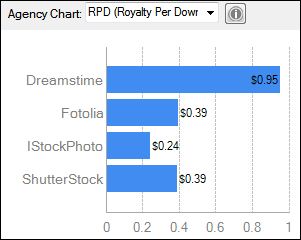 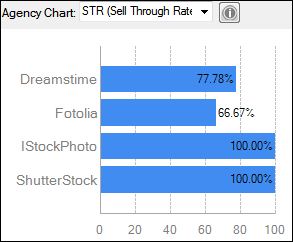 For these images, Dreamstime has paid me the most for each image downloaded, however DT’s ‘Sell Through Rate’ is at 77.78%, which isn’t bad, but that still leaves the other 22.22% of my Cambodia images on DT, waiting nervously before they face the firing squad. 🙂

Andrey Popov is the creator of Microstock Anlaytics and in my communications with him over the last couple of months, I’ve found him to be very professional, responsive and genuinely helpful. Microstock Analytics, he says, has benefited his income enormously as he is able to take the guess work out. By tracking images individually or by seeing various sets, he is able to get a clear picture of what works and what doesn’t and therefore shoot accordingly. At one point his earnings on these sites doubled every month, for three consecutive months and he puts this down to paying close attention to his analytics. Andrey is subscribed to the comments of this post, so if you want to ask him anything he will reply to you here, or you can contact him through his website.

I’ve shown just a few functions and ways of looking at stats via Microstock Analytics. To really get an idea of what it can do and how it can be beneficial to you, you need to register. It’s free for ports with up to 500 images, so for example if you have 500 images across the 4 sites, the stats are tracking 2000 files. Paid packages for ports larger than 500 images start from $9.99.

Below, Andrey in his own words, explains further why he created Microstock Analytics.

“Once I began making decent sales on microstock sites, I wanted to know how well my photoshoots were performing. Initially I started tracking my sales using spreadsheets, but I found this to be time consuming. When I crossed 1000 sales per month I had to spend almost one whole day per month to calculate sales. What will happen when I reach 2K, 5K etc? This problem needed a solution. So I started working on software to help track my sales.

In the beginning it was supporting only Shutterstock. But soon I added the other agencies in the Big 4 and more features. Now tracking was easy and fun. Knowing how well my photoshoots are performing over time, I knew what to expect. Now I could estimate Return On Investment (ROI) on a photoshoot just after the first week of sales. It means I can make test photoshoots with several models and then know exactly the photos which will make more in return. Even if the difference between models fees were 2 times and more. This gave me a lot of confidence in future. Now I’m mostly working with semi-professional to professional models. At some point I decided that Microstock Analytics can be useful for other contributors as well. So I reworked the user interface completely, added more features, improved the speed and stability of software and built a website. Now Microstock Analytics is available to everyone. It is a continual process and I hope to keep improving it, adding more features and eventually more microstock sites.”