Contributors are Furious with Shutterstock but will they Delete their Images?

June 14, 2020June 14, 2020 Microstock Posts
Tired of agencies cutting your royalties? Upload to an agency that will pay you better, up to 52%. Join Revolucy. 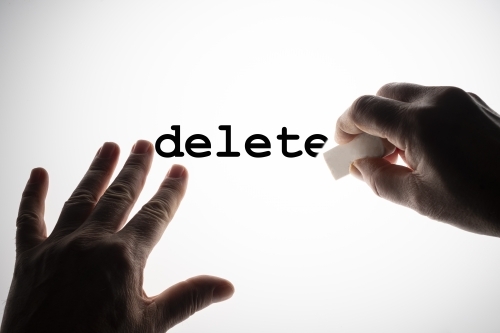 Just under 3 weeks ago Shutterstock made an announcement which turned them into enemy number 1 amongst microstock contributors. Shutterstock are now more hated than iStock it seems, which I don’t think many people would ever have predicted. If you don’t have time to read the rest of this blog, before you go look at the microstock agencies that I recommend you upload to at the bottom of this post.

The difference between iStock and Shutterstock is that while contributors were furious with iStock for their atrocious Google Drive deal, many contributors were exclusive iStock contributors and many more have joined exclusively since the Google Drive deal in 2013. With their eggs in 1 basket most istock exclusives aren’t going anywhere fast. Shutterstock doesn’t have exclusive contributors, so the June 1st implementation of new Royalties has pretty much offended everyone, and if they’re not offended now they will be on January 1, 2021 when every contributor no matter how many downloads they’ve had over the years will be receiving 15% royalties.

Another difference between Shutterstock and iStock is that on shutterstock you can switch off your port with a flick of a switch, no need for Sean to make a monkey script this time. With iStock it was much more of an effort as images had to be deleted one by one. Shutterstock knew this, it would have been discussed in meetings, they knew there would be a rebellion but they’ve predicted the rebellion would not be big enough to affect them. They may even have figured out that it might be worth it if a percentage of contributors left, they may be seeking to reduce storage costs, thus killing 2 birds with one stone, reducing their costs and taking a larger share of sales revenue.

So let’s see some figures. The royalty changes came into effect on June 1. On May 31 Shutterstock had 326,237,838 images, with just under 1.2 million new images going online 7 days up to this date. The first decrease of images and maybe in Shutterstock’s history came on June 3, 2020 when there were about 200,000 less images than the total amount shown the day before. A clear sign that a proportion of contributors have been turning off their portfolios. Almost 1.2 million new images were still added during the 7 days up to June 3, so still lots of people uploading lots of images. The decrease in Shutterstock’s entire collection continues for the days after until Friday June 12, when there was a slight increase. Shutterstock doesn’t update figures over the weekend and this blog post is published on Sunday. That’s right, I never rest! Despite the decrease in the total, contributors were still adding almost 1 million images a week by June 12, which means Shutterstock’s total only fell by 2,228,110. So were they right to think that the royalty cut they would impose on contributors wouldn’t adversely affect them? It’s early days yet, it could go either way, but if the past is something to go by (the contributor rebellion at iStock), the favorite is likely to be Shutterstock. I will keep you informed. 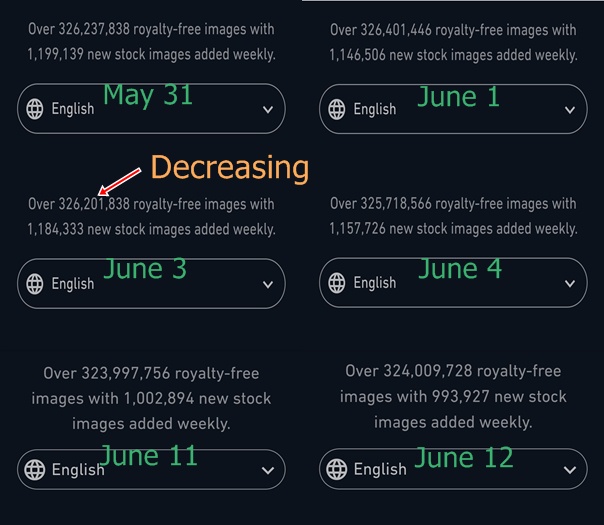 One theory is that with the lower pay eventually Shutterstock’s collection will be replaced with images of lesser quality, as those who produce work which requires more effort will eventually stop uploading to them.

Could Shutterstock be accepting anything now just to keep the total image tally up? Well it’s pretty hard to tell as Shutterstock severely dropped their standards in what images they will accept a few years ago. The contributor below believes that Shutterstock has opened the doors to image spammers, and is posting her findings on Twitter.

#Shutterstock tries to fill the vast image hole in the collection from #BoycottShutterstock. I couldn’t believe what I saw this evening 🤯 One vector portfolio’s new uploads had over *25 pages*-2,500 vectors- like these! Variations are good, but this is padding – image spam 😭 pic.twitter.com/A4P2N3lCu3

Contributors who upload to smaller agencies but then delete their work after a while, so often out of vengeance for not receiving enough sales, are just as to blame for allowing big agencies to walk all over them, as contributors who have supported the leader of small royalties, iStock. You have put your images on sites which don’t respect you with small royalties, and you have removed your images from sites which refuse to lower the far higher royalties they offer you year in, year out. It seems that Stockholm syndrome is more common than we think.

You have played straight into the hands of iStock and Shutterstock by not spreading your work, this is just what they want you to do, they don’t want more competition, they want to pay you even less. It’s astonishing too just how many people only upload to Shutterstock which doesn’t have an exclusive contributor level, you had the time to get your act together for the future, but you too like an iStock exclusive put all your eggs into one basket. I’m sure any business school will say that’s dumb and make sure you never do that. No it doesn’t take much time to upload to several places, there are plenty of tools to help you with getting your images online fast, and internet speeds keep getting faster and prices keep coming down. If you’re thinking that Adobestock alone will be your saviour then think again, no big American company is going to watch your back, the system doesn’t work like that, you are just a cog in their wheel, so don’t put all your stakes on one agency, in the long run it will backfire. The only hope you have of getting larger royalties is if you send all your work to many agencies, so that buyers can find all that they need not with just a few agencies but with many. Where contributors send their work is virtually the only bargaining chip they have. The more competition agencies have the better they will be to both buyers and contributors.

Who should you upload to?

Noone has invested more money and time than a serious microstock agency, and they will want more sales just as much if not more than you do, by helping them you are helping yourself, so that the microstock industry is not dominated by just a few big agencies who can turn the screw on you whenever they desire.

Below are my personal recommendations of agencies who I believe are unlikely to screw their contributors and you should start with them and also move on to others. Spread your work far and wide, this is microstock, not photos being hung up in an art gallery.

The list is in alphabetical order. If you feel you can recommend others then do so in comments with your reasons why.

4 thoughts on “Contributors are Furious with Shutterstock but will they Delete their Images?”