June 6, 2015January 25, 2020 Microstock Posts
Tired of agencies cutting your royalties? Upload to an agency that will pay you better, up to 52%. Join Revolucy.

Magnum photos is currently featuring a fascinating collection called An Image that Changed Everything. The idea was to ask photographers to look back at their careers and identify a single image that represents a turning point in their lives as image makers. Below are 5 of the images from this collection, each with an explanation from the photographer as to what the image means to them and how it changed them. From June 8th to June 12th, these images will be for sale as signed prints for $100 at store.magnumphotos.com 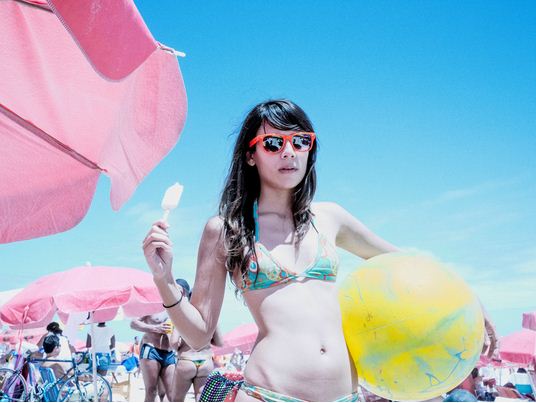 “This photo, which was the cover of my book (Based on a True Story), changed the way I worked forever. After this successful book in 2012, I totally changed my methodology. From that point forward, I focused only on my self-published books. I dropped doing assignments, and simply worked on personal projects and artworks. I never plan a change. Things just happen. I think recognising when something revolutionary is going on in your creative life is the key. One needs to realize when a turning point is right before your eyes. It’s just like photography itself. Fleeting. Carpe diem. Miss it, and you’ve missed it forever.” — David Alan Harvey 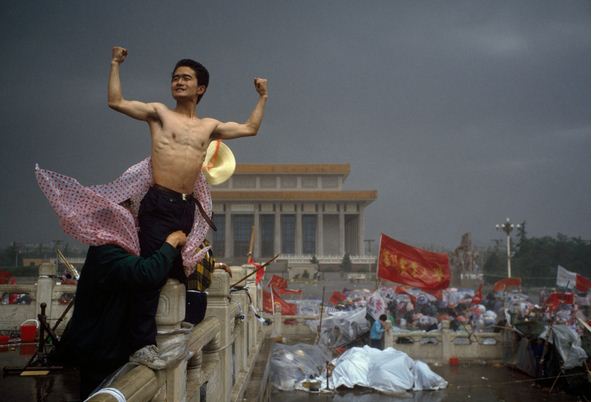 “This is an image that changed everything because, for me, it crystallised the spirit of revolt. The uprising in Tiananmen Square was one of the most moving events I’ve witnessed. It was a tragedy to see unarmed young people shot down in cold blood. It was a movement for freedom of expression, for basic rights, and against the outrage of official corruption. It ended badly, a stain on the reputation of a great country. The facts should not be denied, but discussed, so that people can move on. A lot of things were misreported on both sides. A lot of outside actors were involved that may have worsened the situation for the students and their protest. I want this photograph to be available to people for whom this is an important memory. It symbolises the courage of the time. What it doesn’t show is the bloodshed. I am best known for the image of the tank man. That is called an ‘iconic’ image, but what such images sometimes obscure, with the passing of time, is all the other pictures that lend explanatory power to the story. I’m interested in history, and this landmark event changed my life.” — Stuart Franklin 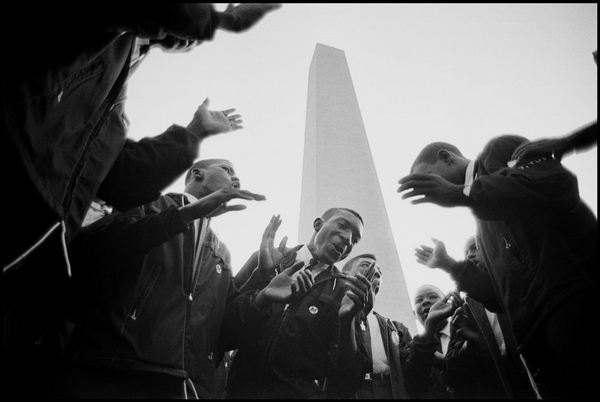 “I came to know Elliott Erwitt, Burt Glinn and René Burri in 1961, when I was a political science student in Tokyo. I was fascinated by their way of working, and it made me wonder if I could possibly become a photographer like them. After my graduation in 1962, I arrived in New York with nothing but $500 and one Leica with a few lenses. I had no background in photography, and had no clue how to start my career. So, one day, when someone told me I should go to Washington D.C. to photograph, I just went. At 6:00 AM on a hot summer day, there were already people gathering at the National Monument. I started clicking away on my Leica, and the more folks came, the more I clicked. I heard the sounds of a speech: ‘I have a dream …’ I knew, instantly, that I was witnessing history by accident. It wasn’t until later that I learned it was Dr. Martin Luther King, Jr. The whole experience made me more aware of the political complexities of America and led me to spend my career documenting the Civil Rights Movement, the Vietnam War, the presidential campaign of 1968 and so much more. In short, the March on Washington changed my perception of the world, and therefore, changed my life.” — Hiroji Kubota 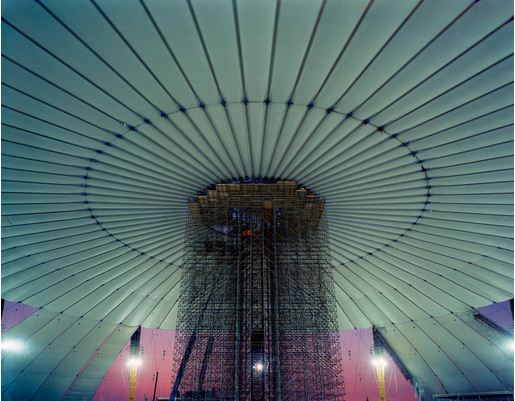 “I’d already been documenting the construction of the Dome for some months. I was a resolute black-and-white photographer then, although was beginning to wonder if this was the right strategy as the building became increasingly strange and otherworldly. But I was nervous about colour, and reticent to use it because I couldn’t process and print it myself. Nevertheless, I bit my lip and bought a couple of boxes of Agfa Optima, a negative film which, I was reliably informed, produced very intense colours. I concluded that if I was going to use colour at all then I might as well really use colour. At night, the Dome was illuminated with sodium light, which drains all understanding of colour. When I got the contact sheets back from the lab I was amazed by the results. I asked the technician who’d printed them if they were ‘right.’ He explained he’d had no reference point to work from so he’d just exposed the negatives as he thought best. I began to understand that in situations like this pictures can be any colour you want them to be. I’ve worked in colour ever since. These days I look for much more subtle results, but I still look back on that first box of film with fondness.” — Mark Power 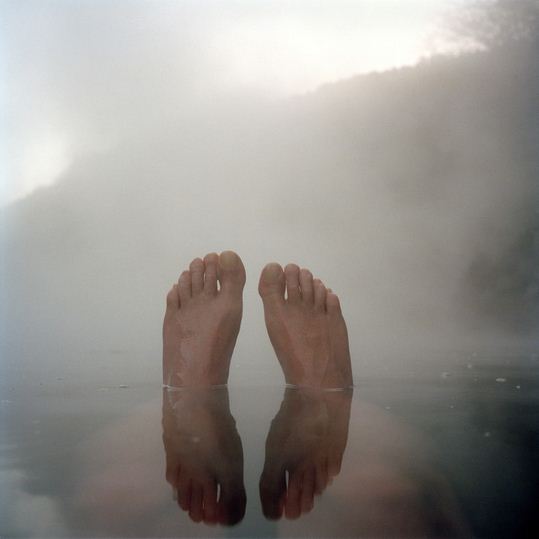 “Very early one morning in 2000, I was dragged out of my bed by my Japanese fixer, the amazingly patient Ito Kadowaki, who guided me through his confusing and ultimately fascinating country. We walked to a river, stripped off all our clothes and made our way into the hot springs that gushed up from the centre of the flow. I was at the point in my career when I was learning that I did not need events to drive my pictures. Photography and authorship are so much about confidence, and I was beginning to understand that I could be less intrusive, let the situation develop and see pictures in the ordinary, in the in-between moments. This particular moment was so amazing: the mist, the heat and coldness in the same place. Taking that photograph of my feet was exactly what I kept from the experience. To be journalistic in that situation seemed wrong, and I simply tried to demonstrate my own experience by becoming part of the photograph. I did my best to keep my rangefinder camera out of the water and simply laid back calmly, relaxed and photographed my feet. Ultimately, I try to let pictures happen, because now, I have the confidence that they always will. What could be simpler?” — Peter Marlow

Is there one image you can identify which you regard as a turning point or a pivotal moment in your life?