How Shutterstock, iStock and Getty compare on Google Trends

January 27, 2014January 25, 2020 Microstock Posts
Tired of agencies cutting your royalties? Upload to an agency that will pay you better, up to 52%. Join Revolucy.

Statistical data about search terms can be insightful. Google Trends is a useful tool to compare the popularity of different search terms and also see to how these results have changed over the years. In the chart below you will see numbers which reflect searches made for the terms, the numbers are not the absolute search volume numbers, Google represents its search data by using a scale from 0-100. A downward trending line means that a search term’s popularity is decreasing. 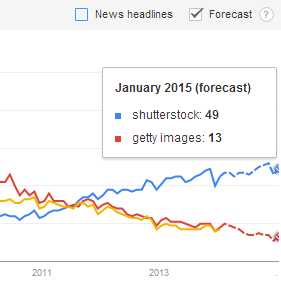 These stats of course don’t represent the profits of the companies, they simply show the level that the companies have been searched for compared to each other, although I would imagine being highly sought after is something both desirable and beneficial for most companies. Google Trends shows that Getty Images and iStock are just not trending like they used to, while Shutterstock is in favour, at least for now.

The chart at the top of the post is the graph as it was when this blog post was posted, which includes a forecast for Getty Images and Shutterstock until January 2015, shown where the lines are perforated. For some reason Google was unable to make a forecast for iStock.